The development and support of this program has been discontinued!
It is still available for download, see below.

JaVaWa RTWtool is a program that allows various conversions of routes, tracks and waypoints. There are options to 'unflag' routes, convert routes to tracks and vice versa, convert a collection of waypoints to a track or direct route.

Routes and tracks can be filtered to limit the number of points per route/track, and they can be split if they exceed a specified length. Tracks can be joined together.

Tracks and waypoints can be enriched with elevation data, and tracklogs can be cleaned up.

Route points accidentally put off road can be corrected automatically.

Routes and tracks can be converted to a series of waypoints in a POI file; optionally in a form like the Hermanizer.

Routes, tracks and waypoints can be separately converted and/or processed, and both the input and the result can be displayed on a map.

JaVaWa RTWtool not only supports GPX files, but a variety of different file formats.
The following file formats can be read:

When importing and converting additional attributes like cadence, heart rate and temperature will be processed too.

A right click (or Ctrl-click on the Mac) in the input list will show a menu with some additional modifications, depending on what is selected:

There is no standard for waypoints in a text file with list separators; therefore the layout can be very different. Also differences in coordinate format, list separator and text encoding will occur.
JaVaWa RTWtool can handle (almost) every combination; it requires more user interaction than other file formats though.
Upon import JaVaWa RTWtool will show a dialog box where you can set the following parameters:

Next you will see a text box with the first ten records from the file; the table below that will show the records split into fields (with the proper settings). When you click a column header, you will get a menu for assigning a waypoint element (e.g. coordinate, name) to a column.
At the end of this menu there are two special options: "Name>Phone number" and "Name@Speed". These are for fields that contain two separate items, which will processed separately by JaVaWa RTWtool. The first one can occur in CSV files for TomTom; the second one in CSV files for Garmin POI Loader.

At the top of the dialog box there are three buttons with presets, and when the file contains field names JaVaWa RTWtool will check these and try to match them with known definitions upon opening the file.

Records that don't contain valid coordinates (according to the chosen settings) will be shown in red in the table. These won't be imported, unless they contain address data (and that is assigned to the following fields: Address, Suffix, City, State/province and/or Country). More about this here.

When exporting to a text file, after been asked for a file name, you will get a dialog box where you can select the list separator, decimal separator, text encoding and coordinate system. You can also select which fields you want in the exported file; you can reorder the items in the list on the right by dragging them to the right position.
This dialog has aslo some presets; "Simple" is for a Garmin POI Loader compatible format, and "POImaker" for a POImaker compatible format.

When text files contain records without coordinates JaVaWa RTWtool can try to find these using address data through the Google Geocoding API.

When converting waypoints to POIs they can be subdivided into groups and subgroups. This can be accomplished in several ways:

You can assign categories to waypoints with JaVaWa RTWtool or BaseCamp.

By default JaVaWa RTWtool adds the regular waypoint symbols to the POI file, but it is possible to use your own symbols. This requires a BMP file with an 8 bit colour depth (256 colours; other colour depths are not supported) and a max. size of 24 x 24 pixels (or max. 48 x 48 pixels for devices with a high resolution screen). Use the colour magenta (RGB: 255 0 255, Hex: FF00FF) for the transparent parts of the symbol. (When you need magenta as a visible colour in your symbol, use a different shade).

There are several methods to link a custom symbol file to your waypoints. In the list below you can see how, and in which order it will be processed (when option 1 isn't applicable, option 2 will be used, etc.)

You can even add photos to POIs (a single photo per POI) by adding a link to a JPG file in the same way as described above for BMP files.

When creating a POI file with JaVaWa RTWtool the following limitation apply: 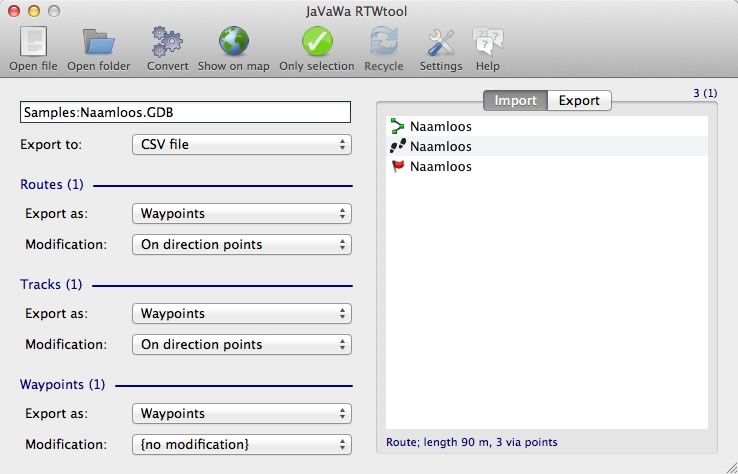 This software is unsupported!

JaVaWa RTWtool is a 32-bit program, and therefore not
compatible with MacOS Catalina and above!
Copyright © 2008-2023 JaVaWa | terms of use | contact