The development and support of this program has been discontinued!
It is still available for download, see below.

You can create a backup of your maps with JaVaWa GMTK and restore these (e.g. on another computer) including unlock codes. Re-installing maps is unnecessary.

Migration of your Garmin maps from and old computer to a new one is straightforward with this application.

Do you want to use your maps on a second computer like a laptop or netbook? JaVaWa GMTK takes care of it.

You can also move maps on your computer to another folder and/or disk, change names of the maps that are shown on the computer and on the device (only unlocked maps like the OpenStreetMap), change the display of maps by installing another TYP file, remove maps, check maps for errors and correct those, import unlock codes from your device and create a backup of the unlock codes.

The application is available both in a Windows and in a macOS version; maps are exchangeable between these platforms.

Note: Don't use the version of Garmin BaseCamp from the Mac App Store, but instead the version from the Garmin website: http://www8.garmin.com/support/download_details.jsp?id=4449. The App Store version has some limitations (because of the sandboxing principle), that the regular version doesn't.

JaVaWa GMTK will collect information about all installed maps and checks for errors (e.g. double map IDs). This can take some time, depending on the number of maps.
Maps with errors will be shown in red; when it concerns file errors it is not possible to backup or move these maps. In many cases JaVaWa GMTK is able to repair errors.

When you use JaVaWa GMTK to transfer maps to a new PC it is higly recommended to do this before installing MapSource. The downloadable version of MapSource is an update version, that refuses to install when no older version exists. JaVaWa GMTK prepares, when necessary, automatically your PC so that MapSource will install properly. 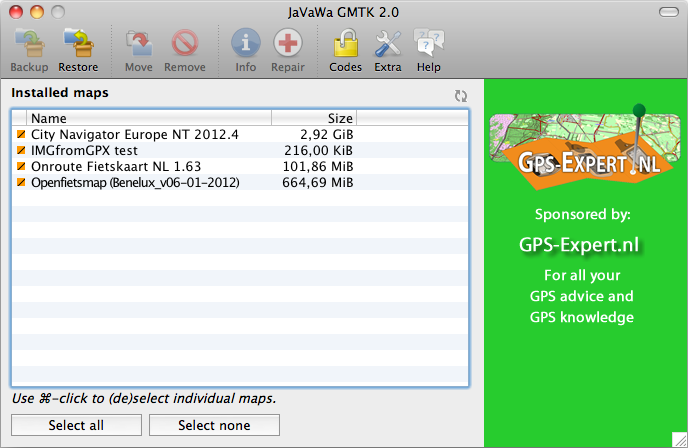 See below for a description of all options.

With this option you can backup your maps (including unlock codes).

First select the maps you want to back up. After clicking the "Backup" button a dialog will display where you can select a disk (preferably a removable medium like a USB disk or USB stick, or a network drive), or a specific folder as the destination.
JaVaWa GMTK checks whether disk space on the chosen destination is sufficient, and if you have writing permissions. If everything is all right the backup process will start. A dialog will show the progress of the individual maps and the progress of the entire selection.

This option restores previously backed-up maps on your (new) computer.

After selecting the disk or folder where you put the maps with the option "Backup", a dialog will display where you can select which maps you want to restore, and optionally select a different location than the default one. The bottom part of the dialog shows the needed and available space per drive.

Make your choices and then click on "Start restore". The maps (including unlock codes) will be installed on your computer.

When one or more maps already exist on your computer these will not be overwritten, unless you choose to do so.

This option enables you to move maps to another folder or drive on your computer, in a way that MapSource and/or BaseCamp are able to use them.

This removes maps from your computer. In the case of corrupted maps some files may remain on your system, but MapSource and BaseCamp will work normally (again).

This option displays a window with detailed information about the map, and the possible errors.

JaVaWa GMTK checks the maps extensively and reports errors when found. Faulty maps are coloured red in the overview. Via "Info" you can see what is wrong and whether they are repairable.

JaVaWa GMTK performs an exhaustive check and can find errors in maps that appear to work correctly in MapSource (but might not work in a future version of MapSource or BaseCamp).

JaVaWa GMTK can repair some of those errors, like double or wrong map IDs or incorrect registry settings.
When two or more maps have the same ID JaVaWa GMTK will assign new and unique IDs, but only to maps that are not locked.

See below for a description of possible errors:

File errors
File errors in registry maps usually are solvable when the files are present, but the references in the registry are incorrect.
In .gmap type maps they are not solvable, except when only the TYP file is missing (in that case the reference to that file will be removed).

The Family ID in the registry doesn't match the one in the map
This problem can always be solved.

The IDs in the TYP file are incorrect
This problem can always be solved.

One or more map segments in the TDB file are missing from disk
This problem can be solved only if the map is not locked. The solution is removing the references to the missing map segments.

The Product ID is used by another map
This problem, that occurs only in maps without a Family ID, cannot be solved.

The Family ID is used by another map.
This problem can be solved only if the map is not locked. The solution is assigning another, unused Family ID to one of the affected maps.

Segment error: Segment codes exist in other maps too
This problem cannot be solved. Double segment codes will not pose a direct problem on Windows, but will do on the Mac. Also, putting the affected maps together on the device will certainly cause problems.

This option backs up all your unlock codes.

This option enables you to read the unlock codes from your device; JaVaWa GMTK will put them in the right place on your computer.

Other scenarios are possible, like having another device with the same map that isn't unlocked on your computer for that device. In that case it would be impossible to put maps on it. Importing the codes to the computer would solve that.

JaVaWa GMTK can search the other user profiles for unlock codes for you, and copy these (when not already there) to your own user profile. After this MapSource and BaseCamp will be able to use the maps.

Maps in the new format (not using registry settings) are becoming more common. These maps have the extension .gmap or .gmapi. Sometimes they are presented as maps for Mac OS X (RoadTrip/BaseCamp), but they can be used in Windows too.
Garmin MapManager for the Mac provides an easy way to install them, but there is no Windows version of it.

This option in JaVaWa GMTK enables you to install these maps. It will check that no existing map will be overwritten, and after installing new maps, JaVaWa GMTK will perform a check for possible file errors and conflicts with other maps. Even on the Mac this method is preferable, because Garmin MapManager doesn't check anything and will overwrite existing maps without warning.

With this option you can add a TYP file (or replace the current one). A TYP file controls the display of the various map elements in MapSource and on your device. By adding a TYP file you can enhance the display of the map. You cannot use just any TYP file, it needs to be suitable for the map. When the ID in the TYP file doesn't match the map, JaVaWa GMTK adjusts it automatically.

A site like the Worldwide routable Garmin maps from OpenStreetMap is ideal to generate useable maps for your Garmin (and MapSource or BaseCamp). The major drawback is that when you download and install a second map from this site, you will lose the first one.

The problem is that each map has the same ID and name, while these need to be unique.
The problem with IDs in general is that there isn't a centralised registration and distribution of them; every map maker can pick their own, resulting in the existence of double IDs.

Luckily it is easy to correct this with JaVaWa GMTK, enabling you to use several maps from the source mentioned above (and others).

After selecting a map and clicking this option you can enter a new ID and the names you want to see in MapSource/BaseCamp and the device.
You can change the folder name too; highly recommended when you want to install several OpenStreetMap maps which are normally installed in the same default folder.

JaVaWa GMTK will check for possible conflicts with other installed maps.

Changing the map ID of a paid map (that usually requires an unlock code) results in a locked map, because the unlock code is linked to the map ID. Because of that JaVaWa GMTK offers this option only for free/open source maps.

Maps that span a large area are often distorted; this is clearly visible at the north and south bounds of the map in both MapSource and BaseCamp. In the center there is no visible distortion. With this option in JaVaWa GMTK you can select another center point for the projection angle. The projection angle needs to be set for each individual map, and is used by both MapSource and BaseCamp.

A 'portable' application on a USB stick can be used on a computer where that application is missing or cannot/may not be installed. You can find a large number of such portable applications for instance on PortableApps.com.

This can be done with MapSource too; on GPS-Expert.nl you can find the necessary information to realise this. Ofcourse it is convenient to have some maps on your USB stick alongside the MapSource application; this option in JaVaWa GMTK enables you to copy maps from your computer to the stick.
One of the features of a portable application is that the Windows registry isn't/can't be used, and this immediately creates a major limitation: it does not work with registry maps, only with the newer .gmap format.

JaVaWa GMTK places the map(s) and the corresponding unlock code(s) and *.gma file(s) in the Garmin\Maps folder on the USB stick, accordingly to the description on GPS-Expert.nl.

Sometimes the display of a map is corrupted in MapSource or BaseCamp; this can be the result of errors in the tilecache. MapSource and BaseCamp use this cache to speed up the display of the maps. Clearing the tilecache forces these programs to redraw the map from scratch.
JaVaWa GMTK clears the tilecache after some operations (for example when changing the TYP file); this menu option enables you to clear it manually.

Creating a backup everytime you installed a new map takes up a lot of disk space. Especially when you have a Life Time Update subscription for the City Navigator maps, your backup will grow fast. It isn't necessary to keep backups of all previous versions. With this option you can clean up your backup folder (or disk).
Note: removed backups cannot be restored.

There isn't a single specific meaning, but it can be (depending on the way you use the application): "Garmin Map Tool Kit", "Garmin Migration Tool Kit" or "Garmin Map Transfer Kit". Of course, Garmin wouldn't allow use of their name in somebody else's product, so best to stick with an abbreviation then.

This software is unsupported!

JaVaWa GMTK is a 32-bit program, and therefore not
compatible with MacOS Catalina and above!
Copyright © 2008-2023 JaVaWa | terms of use | contact